Success By Ten: Why George Russell prioritized values as the key to success 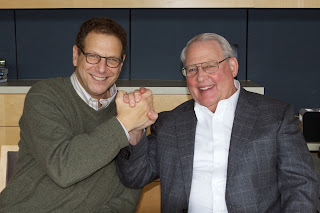 Guest post by Michael Sheldon, principal at XMedia Communications and co-author of Success by Ten.

George Russell is best known today as an innovator. People tend to associate him with the Russell 2000 Index, which flashes across the stock ticker about every 30 seconds on the business news programs. But George’s real claim to fame is the fact that he pioneered so many of the techniques that professional investors use to manage risk. Basic things – things we take for granted today – like the growth and value style of investing, international diversification, and even a fair and reliable method for measuring a fund’s return on investment. All of these were major breakthroughs when George introduced them.

Of course, these innovations didn’t automatically take off in the market. George had to sell them. As a businessperson, sales was probably his core expertise. He proudly describes himself as a peddler. And if you look at Frank Russell Company’s history, you’ll see that George spent 11 years building a mutual fund sales organization before he came up with the “big idea” that enabled him to grow his modest Tacoma, Washington-based firm into a global financial services powerhouse.

Now what makes George interesting as a salesperson – and this is the real subject of these blog entries – is the way he prioritized having a strong, clearly articulated set of core values as the key to success. That is why, when George decided to write his story in Success By Ten, he structured the book around the ten core values that he had established as the guidelines for the corporate culture at Frank Russell Company.

While nine of the ten get pretty much equal emphasis, the first value, non-negotiable integrity, stands head and shoulders above the rest. Integrity was central to George’s personal ethics. His grandfather, Frank, who founded the original company, was an upright man, who was known and respected in the community. For George, Frank’s way was the way you did business; there was no room for compromise.

Integrity is particularly important in the financial services industry. People’s life savings are at stake, so trust is a fundamental requirement. George also recognized that there is enterprise risk – the risk of total failure – when an organization lacks integrity. It’s possible to recover from a poor decision or two, as long as they are honest mistakes. But lying and cheating can destroy a firm – even a centuries-old institution like Barings Bank, or a high-flying outfit with “the smartest guys in the room,” like Enron.

The question is: How do you go about establishing your own and your firm’s reputation for integrity? You can’t go around thumping your chest and crowing, “We have integrity.” You have to show it, not tell it. Again, George’s approach is instructive:

I’m going to conclude with an anecdote, which shows that it’s not always easy to be a peddler with integrity. This story dates from the early days of George’s consulting business. He had just secured his first pension fund client, JCPenney, who then referred him to senior officials at the Penn Central Railroad. This was in the late 1960s, and the firm was in bankruptcy proceedings. The problem was sorting out the exact values of assets in the Railroad’s pension fund, which, at the time, was not a routine task. The Railroad official asked George point blank, “What method do you use to measure investment performance?”

Without missing a beat, George replied, “We use the Dietz Method.”

In fact, George was going out on a limb with this statement. He had been reading about the Dietz Method and thinking about implementing it. But that’s as far as he’d progressed. So, when Penn Central Railroad hired Frank Russell Company to measure the performance in its pension fund, George had to produce.

He dropped everything. He managed to locate Peter Dietz at the University of Oregon and he drove down to Eugene to meet him in person. In the course of that encounter, he convinced Professor Dietz to work with him as a consultant on the Penn Central Railroad project. Problem solved. The client was happy, and Peter Dietz eventually joined the company on a full-time basis. Now that’s salesmanship.

George was proud of this story. He told it countless times, and it became a cornerstone of Frank Russell Company lore. But when we were preparing Success By Ten for publication, a family member raised the question: “What about George’s integrity when he said he used the Dietz method? Sure, he delivered on his promise, but didn’t he lie to get the assignment?”

That caused quite a discussion. The story had already appeared in print, and it was so well-known, we couldn’t see any reason to leave it out of the book. But we’d like to know what you think: Did George behave unethically—or was he acting proactively to solve a client’s problem?