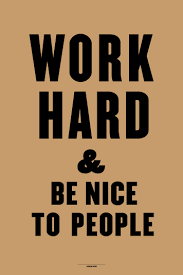 Some people are just naturally smarter than others. But I don’t buy for a minute that this makes them more successful than others.

First, there’s a big difference between book smarts and street smarts. Most people have one or the other. They’re both valuable, on their own and together.

But I don’t know a lot of people who are successful solely because they are smart.

Not all of us get to be valedictorian. There will always be people in your company, in your class, in your industry who are smarter than you are. Some things come faster and easier to them.

Don’t waste a minute worrying about that.

Many of the past century’s most successful businessmen and entrepreneurs failed to complete a college degree. Others got their college degree (gasp!) from a school not exactly in the Ivy League.

Doesn’t matter. What matters is focus, determination and hard work.

I believe working harder will always outperform being smarter.

Working harder, and doing it with successful results, still requires a fair degree of competence, skill and discipline. Working harder without focus isn’t going to get you very far either.

But working harder, by definition, creates more opportunity. It gives you more at-bats. It makes up for and far exceeds what others may rely on based on their smarts alone.

How you do this on a regular basis is fairly simple. Get up earlier. Focus more on things that matter, that deliver external value. Become a world-class leader and delegator. Say no more often, but double-down on projects, initiatives and focus areas you believe in. Publish your ideas. Use early failure as a means of improving the next version, instead of abandoning the project altogether.

The list goes on, and the blueprint is different for everybody.

By the way, you can make yourself smarter too. Read the stories and lessons from today and yesterday’s most successful entrepreneurs. Read voraciously, from a variety of sources, every day. Ask tons of questions. Get a mentor (or four).

You still need to get smarter. But focus more energy on working harder. That, more than anything, is the proven path to success.

Inside the Head of a Marketing Leader: The Buyer’s Journey