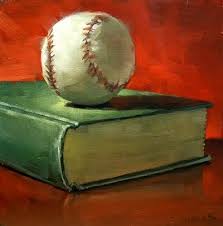 I could argue that there’s plenty of analogies between business & raising children (perhaps a topic for a future blog post), but here I wanted to highlight a handful of baseball books I thought had particular value for business leaders of all shapes & sizes.

If you like baseball, I’d recommend checking out the following:

Branch Rickey: Baseball’s Ferocious Gentleman
Rickey is credited with the phrase “luck is the residue of design”, and is also responsible both for breaking the color barrier with Jackie Robinson, but also with creating the modern minor-league farm system when he was general manager of the St. Louis Cardinals (before he joined the Brooklyn Dodgers). Most people also don’t realize that Rickey was instrumental in the near-launch of a third major league (the Federal League) in the 1960’s, which ultimately brought teams such as the Mets and Padres into the league later in the decade. Rickey was a tireless worker, kept strict standards and discipline for himself and others around him, and is a great model of a business leader & executive.

The Lords of the Realm
I don’t really understand why this book has historically been so difficult to find. It covers the “business of baseball” since the inception of organized baseball back in the 1860’s. It’s incredible to note the similarities then to what we see today – tightwad owners, “overpaid” athletes, cynical fans, etc. But overall, this is a fascinating look at the evolution of a business across generations.

Management by Baseball: The Official Rules for Winning Management in Any Field
Of the books in this list, this one does the most to make a direct tie between the rules & strategy of baseball, and how they apply to business. It’s not the easiest read, and actually can come across rather dry, but it made the list because it offers some direct, and immediately applicable best practices worth noting.

Weaver on Strategy
Former Baltimore Orioles manager Earl Weaver (who passed away last month) was one of the most innovative and creative field managers in baseball history. This book outlines his direct philosophies about managing the game, players, roster, and specific in-game situations. Really interesting to see how he breaks down decision-making, especially since this book was published so far before the active, generalized use of statistics in both the front office and the dugout.

Men at Work: The Craft of Baseball
Speaking of statistics in the dugout, Tony LaRussa’s Oakland Athletics of the late 1980’s made active use of binders and binders full of information about hitters, pitchers, match-ups, etc. George Will (the conservative columnist who is also a baseball nut) wrote this rather-dense look at a handful of successful players and managers – including LaRussa & Tony Gwynn – and broke down what makes them so successful. Of particular note is the preparation each player and manager follows. The hours of studying statistics and videotape. The near-obsessive way in which they constantly strive to get better. Good tips for business leaders who want to keep their edge.

Veek as in Wreck
Bill Veek was perhaps the most creative (and crazy) owner in baseball history. The current game day experience (music, between-inning antics, turnstile promotions) owe most of their beginnings to Veek. In this autobiography, Veek outlines why he did what he did, and even forecasts changes to baseball that wouldn’t come for 20+ years – including regular inter-league play. Biographies of great business leaders are nice, but autobiographies can give you direct access. Great stuff on Veek, a pioneer perhaps years ahead of his time.

The Extra 2%: How Wall Street Strategies Took a Major League Baseball Team from Worst to First
Most baseball fans (and business leaders) have heard or and perhaps read Moneyball. But few have read The Extra 2%, which chronicles the rise of the Tampa Bay Rays to prominence and contention. The Rays for years had been a perennial bottle-dweller run by an inept owner, but a few years ago the team was bought by a team of former Wall Street traders. This book outlines how the team began applying Wall Street investment principles to how they managed the Rays – including choosing their roster, salary negotiations, fan experience improvements and more. And after a few years of investment and development, the Rays are now one of the league’s annual contenders year after year. Quick read but worth it.

Steinbrenner: Last Lion of Baseball
When I read Walter Isaacson’s biography of Steve Jobs, I had three reactions. One, Jobs was brilliant. Two, he was pretty much the asshole we all have heard that he was. Three, it’s difficult to imagine his company performing as well without him. I had the exact same reactions when I finished this biography of George Steinbrenner (deceased owner of the New York Yankees, though as of today his family still holds majority ownership in the team). Steinbrenner was relentless, but also a visionary. He was ruthless in dealings with people, but also had an extremely generous side that few people saw. And it’s difficult to expect the Yankee organization to maintain its edge in the same way without him. Great read of another industry titan.