What Dr. Seuss can teach you about sales & marketing 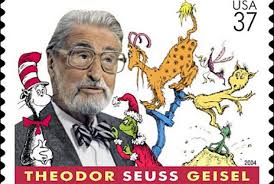 I recently picked up a Dr. Seuss anthology as a gift for a friend’s little girl. I couldn’t help but sit down and flip through the pages and realized that through his whimsical rhyming he was teaching us some great life lessons. I thought it would be fun to apply a few of them to how we approach sales and marketing.

The power of branding
Ted Geisel had a great product – his stories—and he knew that beyond having a great product, brand identity was very powerful. So he called himself Dr. Seuss. Genius. It’s perfect for his audience; fun to say, easy to remember, and now, legendary.

Actually, Seuss was first pronounced “Soice” (like voice) but he changed the pronunciation because it “evoked a figure advantageous for an author of children’s books to be associated with Mother Goose” and because most people used that pronunciation. He recognized the benefit and went with it. Double genius! By the way, he is in the top 10 selling fiction writers of all time.

Influence in creative ways
So let’s say that Sam watches a lot of Food Network and now he only wants eggs benedict with organic bacon, micro greens, and truffle oil – and the guy in the book, well, he only had green eggs and ham. So what did he do? He could have exaggerated or made false promises about his product, but he didn’t. He sold an experience.

Nurture those leads
In Horton Hatches the Egg, we read about a lazy bird that abandoned his egg and asked Horton the Elephant to watch over it. Let’s say that egg was a big database of leads. So, Horton agrees to tend to those leads but first knows he had to prop up that tree to make it stronger. Maybe for us that means building a great nurture campaign or spending five minutes a day on social media.

Then came a freezing Winter, which makes me think of all that talk about “leads/buyers in the pipeline that express a pain but aren’t quite ready to buy.” Horton played it smart, was patient, then finally. “A thumping, a bumping! A wild alive scratching!” “My egg shouted Horton, My egg, why, it’s hatching!” And his egg hatched and everyone cheered, and that lazy bird didn’t get anything.

Have fun, or even be a little naughty
We all remember the Cat in the Hat; it was one of the most popular Dr. Seuss books. Sally and her brother were shocked and amused by the outlandish behavior of the Cat – and so were we. Who can forget how he threw cake in the air and tossed that poor fish around?

Things that are silly, funny, and a little naughty still get our attention. When we see these attributes used in a magazine ad, at a tradeshow booth, or in a piece of direct mail it REALLY gets our attention. What do you re-tweet or forward? Think about it. If your brand or message allows for a little humor or bravado why not use it? Get people talking about you!